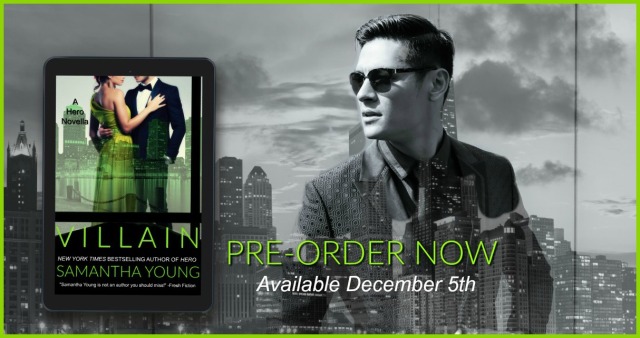 It can come as no surprise that I jumped on the chance to participate in the Villain tour!

Nadia Ray is not just a broadcast meteorologist. She’s Boston’s morning television It Girl. Successful and independent, she’s put a past she’s ashamed of behind her and is forging a future she can be proud of. However, when her new boss discovers her secret he blackmails her, intent on using Nadia’s popularity to make them the number one morning show in Massachusetts. He wants her to be part of uncovering the city’s biggest scandal – a secret billionaire Caine Carraway is hiding.

Soon Nadia is thrown into the path of Caine’s best friend: sexy, wealthy bachelor Henry Lexington. But she doesn’t encounter the dashing high society gentleman Henry is purported to be. Instead she’s faced with an insulting and defensive villain who misjudges her at every turn.

When Henry finally realizes the truth, and decides to make amends, Nadia wants nothing to do with him. But she underestimates his determination and charm and soon they find themselves embroiled in an intense, passionate affair.

An affair Nadia knows must come to an end before their feelings grow any deeper and he discovers her secrets.

After all, Henry Lexington isn’t the only one who played the part of a villain once…

Shaking off the memory of yesterday, I grabbed my purse and opened the door to my apartment with every intention of jumping in a cab to the address Joe had given me.

However, a man blocked my way.

He stood in my doorway, his fist raised as if to knock.

Shocked, I stared up at his familiar face.

Why the hell was Henry Lexington standing in my doorway?

His vibrant blue eyes met mine and for a moment, neither of us said a word. Silence stretched thinly between us, and I suddenly realized I was holding my breath.

“We need to talk.” He pushed past me and walked into my apartment without an invitation.

For a moment, I stood there with my mouth open, asking myself if that had just happened. Were people really that rude?

I stared after him, watching him disappear out of my hall and into my sitting room.

All my papers on Carraway were in there!

“Hey!” I called, shutting the door and hurrying after him. “What do you think you’re doing?”

Lexington stood in the middle of my small sitting room, his back, thankfully, to my desk. His expression was sullen, cool, and calculating. This was not the charming, hedonistic millionaire I’d read about. “I could ask you the same thing, Miss Ray.”

“Excuse me?” Cold sweat prickled under my arms. Did he know? How did he know? If he didn’t know, why the hell else would he be here? Why was he here and not Carraway?

I waited anxiously for Lexington to stop boring through my face with his hard eyes. “I assume you know who I am.”

“That blank expression isn’t fooling anyone, Miss Ray. I know she said a few unfortunate things to Richard Peters, your boss, and I know you’ve been calling her ever since.”

Despite my guilt, despite knowing I was in the wrong here, this privileged asshole had burst into my apartment to intimidate me. Like hell! “You do, do you?”

His eyes narrowed. “Imelda informed me of what’s been going on and asked me to kindly give you a message.” He prowled toward me and I suddenly felt real fear. I didn’t know this man and he was here to shut me up. How far would he go? I steeled myself, not wanting him to see my fear. If my expression gave me away, however, I didn’t know; all I did know was that Henry Lexington stopped a good foot from me. It still wasn’t enough. He stood at over six feet, his broad shoulders fitted into a perfectly tailored three-piece suit. He had big, masculine hands, one hidden in his pocket, the other resting on his flat stomach over a suit button. Henry Lexington had a swimmer’s build—sleek but powerful—and I could only guess at the strength beneath his suit. I struggled not to feel overwhelmed by his large, magnetic presence, as much as I struggled not to feel fear.

“You’ll leave her alone,” he demanded.

Guessing there was no point in being coy considering he’d seen my desk, I asked, “Why are you here instead of Carraway?”

Lexington flashed me a wolfish grin that didn’t reach his eyes. “Because I’m the nice one. Caine scares Imelda. He scares most people. Not you, though.” He took another step toward me, seeming to be cataloguing every little nuance of my face. “And if you’re not careful, that lack of fear could ruin you, Miss Ray.”

I know what you’re thinking. Another Samantha Young review, Michelle? My answer is, and always be, YES! Sam Young is among my favorite authors and I will read (and there’s a 99.9% chance that I will love it) anything she puts out.  Villain was no different for me.  I LOVED getting Nadia and Henry’s story.

I when reading Hero I was always a little in love with Henry, and I was very excited to see that he found happiness in Hero. But I was left wanting to know more about them.  How did they get together? How were they together? And after 2 years of considering it, we finally got our answers.

I absolutely loved Nadia.  Despite her mistakes, and peoples’ wrong views of her, she always stood up for herself.  Nadia is an intelligent, driven, beautiful meteorologist at a news station in Boston.  Despite her brain, she is treated like an object by her male boss.  Young couldn’t have written a heroine with this struggle at a better time.  Nadia faces what many, many women in the entertainment industry face.  Nadia struggles with the decision to report him, knowing that it would most likely end in her losing her position at the station.  I won’t tell you what happens because spoilers but it broke my heart to see her struggle and know that this is an all too common problem.

Henry, oh Henry.  I have to say I adored Henry in Hero and I loved him in Villain as well. He is so charismatic, a little bit clueless, very attractive, and a good deal protective.  I don’t actually know of a Young character that I don’t just love.  Henry and Nadia are no exception.

The only complaint I have with this book is that it was too short.  I always find myself wanting more out of her books, despite the fact that they are full novels.  I lose myself in her characters and their relationships and I never want to leave these characters.  Henry and Nadia were like Ellie and Adam for me.  I find myself re-reading Ellie’s novella and even though I knew going into it that they got their happily ever after I wanted more of their story.  I feel the same way with Henry and Nadia.  I want more of their story, more of their HEA.

If you’re a sucker for hot romance, swoony characters, strong heroines, and hunky heroes then you won’t be disappointed with Villain.  It’s definitely going on my re-read shelf.

So Sam, if you’re reading this, we want more more more of ALLLLLL of your characters.  (Also, I’m SCREAMING with excitement about Liv and Nate’s Hart’s Boardwalk novel. I CAN’T WAIT!)

And finally be on the lookout for Sam’s new releases coming.  She’s constantly teasing us with her works in progress and I am so very excited for everything she’s hinted at! 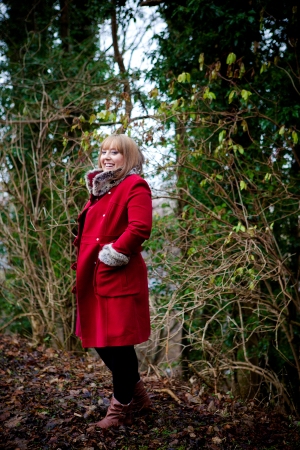 Samantha Young is the New York Times,  USA Today  and Wall Street Journal bestselling author of adult contemporary romances, including the On Dublin Street series and Hero, as well as the New Adult duology Into the Deep and Out of the Shallows.  Every Little Thing, the second book in her new Hart’s Boardwalk series, will be published by Berkley in March 2017. Before turning to contemporary fiction, she wrote several young adult paranormal and fantasy series, including the amazon bestselling Tale of Lunarmorte trilogy. Samantha’s debut YA contemporary novel The Impossible Vastness of Us was published by Harlequin TEEN in ebook & hardback June 2017. Play On is an adult contemporary romance and the first in a brand new series set in Scotland. Villain is a companion novella to the New York Times bestselling romance HERO.

Samantha is currently published in 30 countries and is a #1 international bestselling author.